I am the author of the Crop Circle Cards, The Living Oracle.  And I’ll be familiarizing you with the symbolic soul language of the crop circles and what’s been going on in England and around the world where the crop circles have been showing up.

Every summer, since I began visiting England I’ve seen new crop circles appear in these fields of cereal grain, and I’m looking forward to a new batch this year.  Join me for an exciting summer’s investigation of the mystical sacred sites and crop circles in England.

Welcome to England! Our group meets at Heathrow Airport at 1pm and we’ll be transported to our first hotel in the quaint city center of Marlboro. We’ll have a meet & greet to get acquainted & discuss the itinerary. You’ll then have the rest of the day to acclimate with the surroundings and decompress after your journey here.

In the evening, we’ll dine together to celebrate the start of our mystical adventure.

Today we’ll visit Avebury’s Circle of Stones which is a Neolithic henge monument containing three stone circles, around the village of Avebury in Wiltshire, in southwest England. One of the best known prehistoric sites in Britain, it contains the largest megalithic stone circle in the world. It is both a tourist attraction and a place of religious importance to contemporary pagans.

Constructed over several hundred years in the third millennium BC, during the Neolithic, or New Stone Age, the monument comprises a large henge (a bank and a ditch) with a large outer stone circle and two separate smaller stone circles situated inside the centre of the monument. Its original purpose is unknown, although archaeologists believe that it was most likely used for some form of ritual or ceremony. Most of the circle of stones have been reconstructed. Often this has been a site for crop circle nearby.

After lunch, we’ll visit Silbury Hill which is a prehistoric artificial chalk mound near Avebury in the English county of Wiltshire. Silbury Hill is part of the complex of Neolithic monuments around Avebury, which includes the Avebury Ring and West Kennet Long Barrow. It’s the largest artificial mound in Europe and comparable in size to the Egyptian pyramids. Probably completed around 2400 BC, it apparently contains no burial and its purpose and significance remain unknown.Its original purpose is still debated. Several other important Neolithic monuments in Wiltshire in the care of English Heritage, including the large henges at Marden and Stonehenge, may be culturally or functionally related to Avebury and Silbury.  Often this has been a site for crop circle nearby.

The West Kennet Long Barrow is a chambered long barrow near the village of Avebury in the south-western English county of Wiltshire. Probably constructed in the thirty-seventh century BC, during Britain’s Early Neolithic period, today it survives in a partially reconstructed state. Some believe it was a village burial chamber for a short time. It’s part of the Avebury World Heritage Site.  Often this has been a site for crop circle nearby.

In the evening, we’re free to enjoy Marlboro with it’s great selection of restaurants and cafes.

Though there is no definite evidence as to the intended purpose of Stonehenge, it was presumably a religious site and an expression of the power and wealth of the chieftains, aristocrats, and priests who had it built—many of whom were buried in the numerous barrows close by.

Present-day Druids gather there every year to hail the midsummer sunrise. Looking toward the sunrise, the entrance in the northeast points over a big pillar, now leaning at an angle, called the Heel Stone. Looking the other way, it points to the midwinter sunset. The summer solstice is also celebrated there by huge crowds of visitors.

On our way back to Marlboro we’ll stop at the Barge Inn for a meal and connect with other “croppies” and the latest crop circle news.

Our journey continues as we travel to our hotel in Glastonbury and see the beautiful English country side. At any moment we are ready to spot crop circles along the way.  We’ll settle in our hotel and you’ll have the rest of the day to explore Glastonbury at your own pace.

Glastonbury has been associated with the romance of King Arthur, the Holy Grail and Joseph of Arimathea. … In the 19th century, a popular West Country folk tale claimed that Christ had visited Britain with his great uncle, Joseph of Arimathea, a merchant of tin.

Mary Magdelene is legend to have come here with Joseph after Christ’s death and they created the 1st Christian church, a humble “brushwood church” which grew and transformed in time.

Glastonbury Abbey claimed to have developed from an ‘Old Church’. A fire destroyed the Old Church in 1184 but its description appears in earlier sources. Around 1130, William of Malmesbury described Glastonbury’s ancient ‘brushwood’ church. He suggested that missionaries founded it in AD 166. William thought it could even date back to the time of Christ’s apostles.

“The church at Glastonbury… is the oldest of all those that I know of in England… In it are preserved the bodily remains of many saints, and there is no part of the church that is without the ashes of the blessed. The stone-paved floor, the sides of the altar, the very altar itself, above and within, are filled with relics close-packed. Deservedly indeed is the repository of so many saints said to be a heavenly shrine on earth.”

As William’s history of Glastonbury was re-copied, people made new additions. The 14th-century monks claimed that the Old Church was founded by Joseph of Arimathea in the year AD 63. According to the Bible, Joseph was the man who gave Jesus his tomb and he was believed to be Christ’s great uncle.

In 1184 a fire destroyed the Old Church. Any final traces were lost when the crypt was dug into the Lady Chapel around 1500, so the form and appearance of the Old Church can only be conjectured.

The abbey’s first archaeologist, Frederick Bligh Bond, suggested that it may have resembled an Iron Age round house. 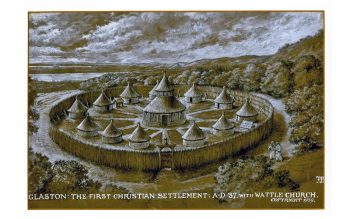 After, breakfast we’ll have a tour of mystical Glastonbury beginning with the Tor of Glastonbury.

Glastonbury Tor is a hill near Glastonbury in the English county of Somerset, with ruins of a church, St Michael’s Tower sitting on it. The terraces form a kind of labyrinth that pilgrims followed up the sacred hill. The hill has had a long religious history with evidence of a settlement on it of early Christians who honored the sacred. According to legend, the Tor, is hollow and the sacred gate to heaven, guarded by the Grail, the divine feminine.

Next, we’ll visit the Chalice Well Garden and drink it’s healing water. The Chalice Well, also known as the Red Spring due to the iron content, is a well situated near the summit of Chalice Hill, a small hill next to Glastonbury Tor.

We’ll have time to relax, reflect and do a special meditation in this beautiful garden.

According to legend, the holy chalice or holy grail which is the divine feminine, guards the passage way the soul takes to heaven.   The chalice well is a symbol of the feminine aspect of deity, and its waters are believed to possess healing qualities.

Taking a box lunch with us, we’ll explore the ruins of Glastonbury Abbey where according to legend, King Arthur and Guiniver are buried. 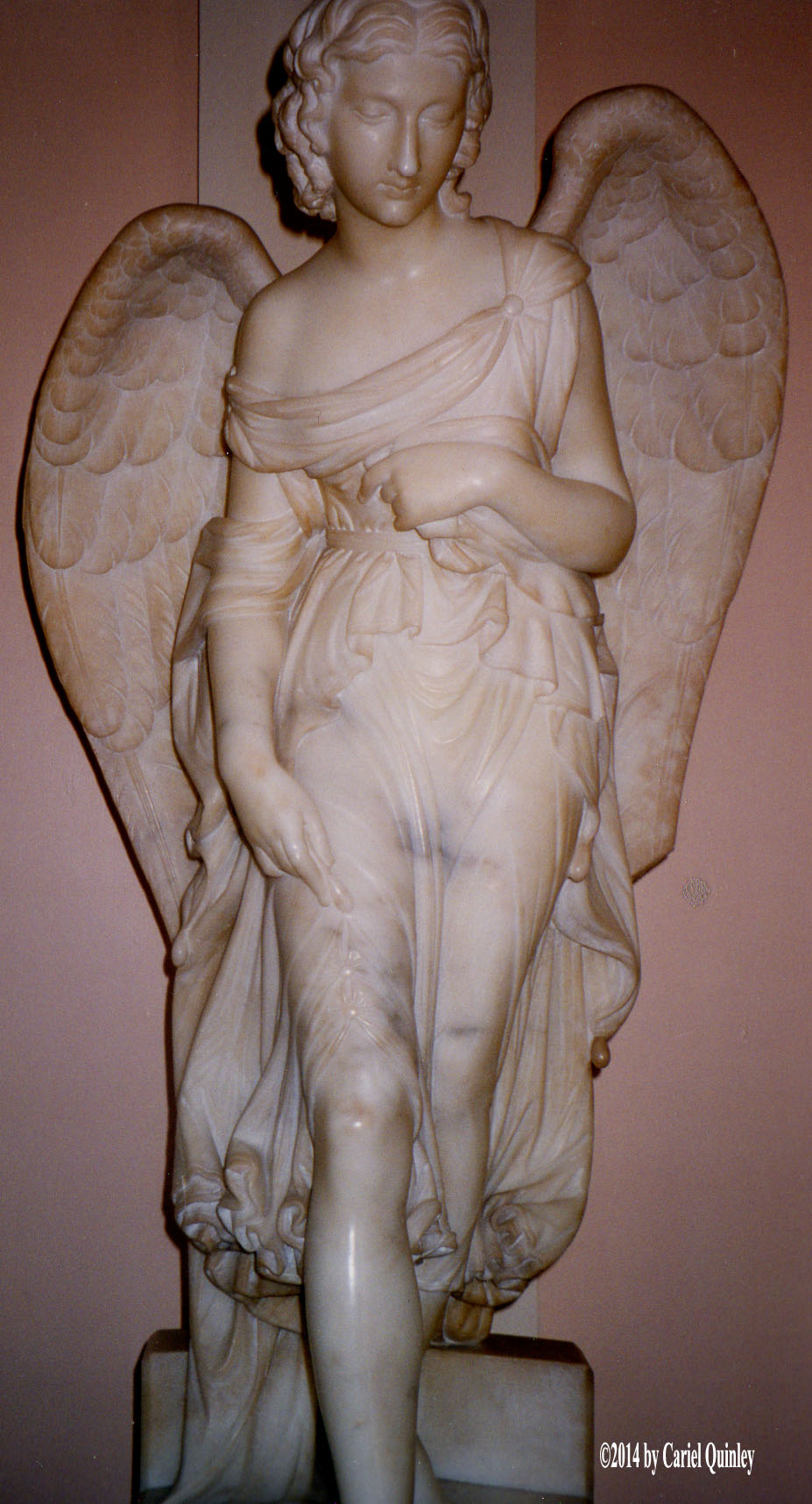 This is Day 1 of Crop Circle International Symposium.  Enjoy as much as you want of the Symposium. And you’re free to explore Glastonbury on your own, i.e., check out St John’s Church where according to legend, Joseph of Arimathia is the figure depicted on the left in this stained glass.

You’re free to attend Day 2 of the Crop Circle International Symposium or follow other soul pursuits.

You’re free to attend Day 3 of the Crop Circle International Symposium or follow other soul pursuits.

In the evening, we’ll have a delightful meal together as we celebrate the successfully completion our mystical journey.

We’ll journey to Heathrow Airport for our flights home.